SEMA 2012. Must See Attractions at the World’s Great Automotive Show… 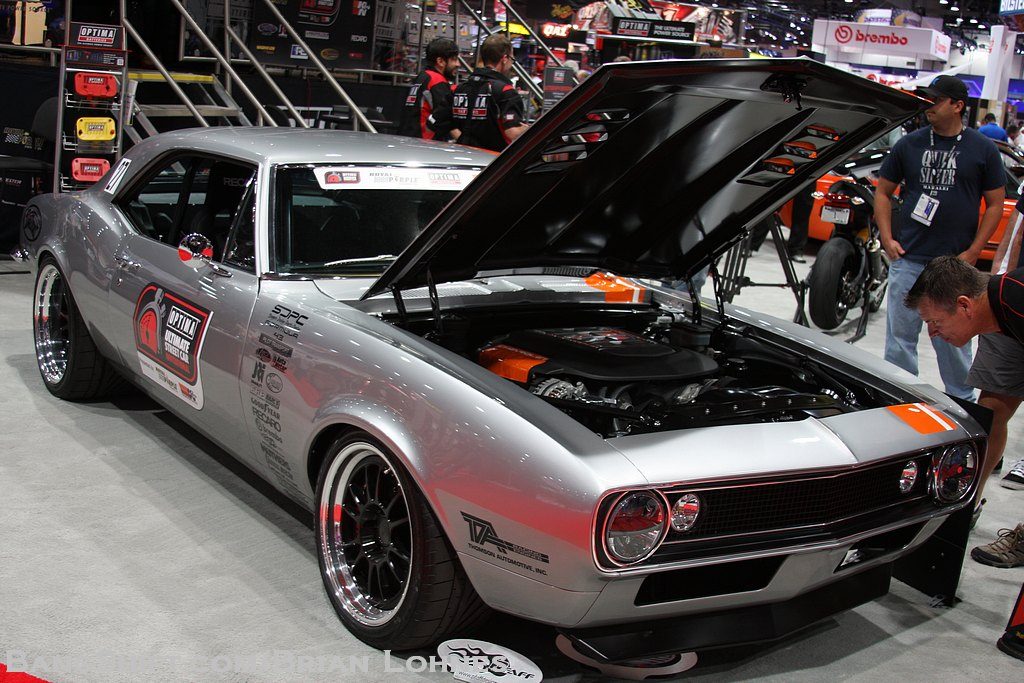 The SEMA Show is the world’s largest automotive trade show, but it’s much more than that. It’s a museum, a looking glass into the future, a university, a carnival, a catalog of innovation, a media frenzy and an incubator for tomorrow’s industry leaders. In short, from Tuesday, October 30–Friday, November 2, it’s the place where every automotive professional should be and where every auto enthusiast wishes he or she could be.

From the moment the doors swing open until the last vehicle departs on the roads leading out of Las Vegas, the SEMA Show is jam-packed with must-see vehicles, parts and programs. Below is just a sampling.

Built From eBay
Front of Las Vegas Convention Center in the Silver Lot
Here’s a different spin on the project-car theme: eBay, in association with Source Interlink Media (SIM), has partnered with four garages to build four distinctly different vehicles. As the four are being completed, they are being voted on by visitors to a build-specific website (www.builtfromebay.com), where they will ultimately choose their favorite. When the vehicles are completed, they will be auctioned off on eBay, and the proceeds will go to four affiliated charities. The unique caveat is that each vehicle was purchased on eBay and all of the parts—vintage and new alike—were also acquired on eBay.

Ford Out Front
Las Vegas Convention Center
Ford will again feature its current crop of star drivers and racing vehicles in the Ford Out Front exhibition just outside the halls of the LVCC. The Ford Out Front experience will showcase Ford high-performance drivers performing drifting, Gymkhana and freestyle demonstrations in Ford high-performance products. In 2011, Ford brought drivers Vaughn Gittin Jr. and Ken Block to the SEMA Show, and the program is slated to be just as exciting for 2012. Be there for driving demonstrations by drifting masters.

GM Proving Ground
Orange Lot (between Central Hall and South Hall)
General Motors will once again play a substantial roll in the SEMA Show. Its multi-venue extravaganza will include a historical display, live interviews with four current race drivers over four days of the Show and a repeat of the Chevy Drive in the open area between the Central and South Halls, where attendees can hitch a ride. All that plus one of the largest exhibition spaces in the LVCC that will be filled with newly completed project cars and the hottest GM products.

Hot Rodders of Tomorrow Engine Challenge
Outside Plaza in front of Central Hall near the “Car Crazy” Studio
High school teams from across the country will compete for the national championship title by tearing down and rebuilding identical high-performance 350ci Chevrolet small-block engine fitted with top performance parts. Tailored after the efforts that go on between rounds of drag races throughout the country, the Hot Rodders of Tomorrow “Showdown at SEMA” is the culmination of eight preliminary competitions around the nation, each of which will send a regional champion to Las Vegas. The final tale will be told by the team with the fastest time and the least number of penalty points. Look for the final rounds this year on the outside plaza in front of the Central Hall near the “Car Crazy” Studio.

Magazine Bins
Sky bridge between South and Central Halls
Want to see what’s currently hot in the marketplace? Want to find out what consumers are really interested in? Check out the dozens of domestic publications produced by companies exhibiting at 2012 SEMA Show. These publications are free while supplies last outside of the SEMA Show Media Center on the South Hall Skybridge. In addition, international magazines are also distributed free outside of the Center for International Commerce on the South Hall Skybridge. Get the lowdown for no dough!

Mopar Alley
Orange Lot (between Central Hall and South Hall)
The best way to navigate between the east end of Central and South Halls is through Mopar Alley—a show within the Show featuring some of the hottest feature vehicles in the industry. When you are ready to transition from hall to hall, be sure to take a stroll through this one-of-a-kind array of cars and trucks and even take in some of the live music that will be performing throughout the week.

Off-Road Success Center presented by OMIX-ADA/Rugged Ridge
South Hall, Booth 30147
Companies that are involved in the off-road segment of the automotive specialty-equipment industry will be treated to a new Off-Road Success Center, presented by OMIX-ADA/Rugged Ridge. This educational display will provide business owners and decision makers with a purpose-built venue to exchange ideas, learn new concepts for success and network with other like-minded businesspeople, get one-on-one consultations, see demonstrations and vehicles that will include vintage models provided by Jeep Jamboree USA and OMIX-ADA.

Overhaulin’ Studio
Alcove at the front of the Truck, SUV & Off-Road Section
After a hiatus of several years, “Overhaulin’” returns on the Discovery Channel with Chip Foose. The crew will also return to the SEMA Show to film a new episode with Foose and cohosts Chris Jacobs and Jessie Combs. True to the “Overhaulin’” premise, they will “steal” a car from an unsuspecting victim, then source products from SEMA Show exhibitors as they remake the vehicle over the course of the Show week, culminating in a surprise reveal. The “Overhaulin’” studio is located in the alcove at the front of the Trucks, SUVs & Off-Road Section of South Hall.

SEMA Cruise at Show Close
The SEMA Show is undoubtedly a highlight of the year for the industry, but the highlight for the local populace is the SEMA Cruise, a feature that was introduced last year. At the conclusion of the Show, as the booths are dismantled and the products are packaged for shipment home, the display cars are driven out of the convention center. While this parade of rolling art has always been highly anticipated, it became an official part of the Show in 2011. When the Show ends at 4:00 p.m. on Friday, the SEMA Cruise begins. Featuring awards, giveaways and entertainment. So even though the carpets may be rolled up, stick around to see this last blast. It’s like automotive fireworks.

SEMA Gear
Grand Lobby, Lower South Hall Lobby, Central/South Hall Skybridge, East end of Grand Lobby Concourse & Silver Lot in front of Central Hall
While brochures, information sheets and product photos are a given at the SEMA Show, don’t forget to stop by one of the many SEMA Store locations. Pick up gifts for friends and business associates back home, including T-shirts, hats, rolling back packs, books and more.

Silver Lot (Big Rig Displays)
Front of the Las Vegas Convention Center
The outdoor displays offer more than your average hot rod. The Big Rig displays located in the Silver Lot at the front of the Las Vegas Convention Center showcase an impressive collection of exhibitor show rigs, race transporters and coaches fitted with the latest equipment and accessories. See products, parts and cushy rides, but also check out the tractor/trailer rigs themselves.

SEMA Vehicle Technology Center and Theatre
Grand Lobby
The SEMA Vehicle Technology Center (VTC) and the Technology Briefing Seminar (TBS) program are designed to introduce SEMA members to the benefits of SEMA-developed vehicle technology solutions and partnerships and help them to leverage tomorrow’s technologies, which is central to business survival and the growth of the automotive specialty-equipment industry. The VTC has been moved to the Grand Lobby of the LVCC for the 2012 SEMA Show and features a wealth of forward-looking forums and panels sessions based around vehicle dynamics, racing and performance, connected-vehicle technologies and SEMA’s partnership with the Clemson University International Center for Automotive Research. Visit www.SEMAShow.com/education for a schedule of TBS programs.

PreviousPacking for the long road to SEMA 2012. Burning the midnight oil.
NextD&P Crew takes a trip to SEMA 2012 in Las Vegas.