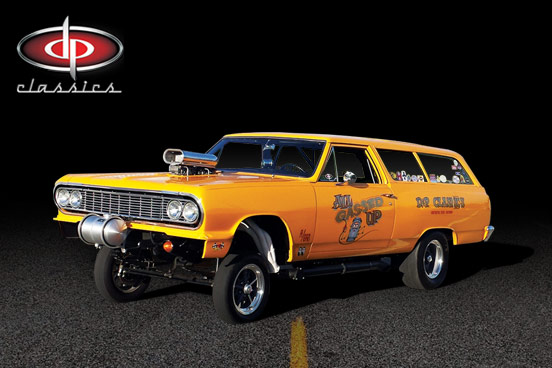 Those of us who grew up in the Southern California car culture were a lucky crowd. Our average week included cruising Van Nuys Boulevard, cruising Hawthorne Blvd, hanging out at the Bob’s Big Boy in Westchester, Orange County International Raceway, and cruising Redondo Beach on the weekend. Oh yeah, and all that was after school and work.

In those early days we couldn’t afford to take our cars to a repair shop so we had to learn how to fix our hot rods which we broke on a regular basis. Of course we spent most of our pay checks on parts at places like the Super Shops buying cams and carbs.

One of my favorite cars from my youth (let’s just say early 1970’s) was my 1964 Chevelle wagon. It was purchased from a mom and pop car lot on Hawthorne Boulevard for $999.00 and I had to make payments for a year.

It was stock when I bought it but that didn’t last long. It quickly received a high performance 327 and turbo 400. It had headers and thrush glass packs that didn’t have much quiet left in them. I had to shut it off a block away when dropping my girl Peggy off at home late in the evenings.

I worked on that old wagon for years before I got it finished. As time marched on other responsibilities became more important and I had to sell the old wagon to get a commuter car for college. I always missed her and vowed some day to replace it.

Fast forward a few decades. My wife Peggy and I were at a car show in Laughlin, Nevada and I found an ad for a 1964 Chevelle Wagon located in Bullhead City, Arizona. It was a rare 300 series 2 door wagon which is what I wanted. The owner said it was a basket case and when I went to check it out I found it was a few baskets short of a full load. It was in decent shape though (unless you believe Peggy) and I knew I could save it and build a replacement for my first wagon. Of course I bought it and drug it home. Peggy wasn’t exactly pleased with my purchase but I swore (as all guys do) that I could really turn in into a cool car. Now that I had my wagon I had to decide what to do with it.

As a long time drag racer I always enjoyed the hot rods known as Gassers. I had never owned one but I had driven a few so I knew they were somewhat radical if driven on the street.

Fast forward several more years during which time I slowly made progress on my Gasser Project.

I finally got serious and dedicated to the project so I started working a little faster. I described my vision for the wagon and my sons Nick and Pat had a rendering done and gave it to me for Christmas. That vision was enough for me to get real serious (all guys say that I know).

I approached several companies that we do business with and shared the rendering with them as I asked for sponsorship with some of the parts I planned to use. Fortunately everyone I contacted was also enthusiastic about the project and agreed to participate. I would like to thank all the sponsors listed below for their generous help on the Gasser.

Most of all I would like to thank my wife Peggy for putting up with me all these years (let’s just say it’s over 40) and my sons Nick and Pat along with the crew at D&P (Craig, Mike, and Alex) for helping me achieve one of the items on my bucket list.

Since completion I have driven the Gasser regularly and attended a number of shows. Oh by the way I named her “All Gassed Up.” As you can imagine I spend a lot of time at gas stations feeding those big Holleys on that tunnel ram. She’s fast, she’s loud and she’s a handful to drive, but hey that’s part of hot rodding.

By the way John Gilbert shot her for an upcoming edition of Super Chevy Magazine.

Here’s the sponsors for the gasser: 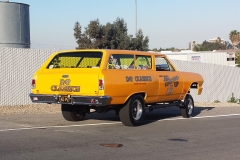 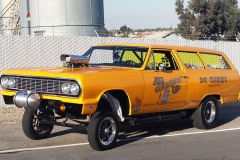 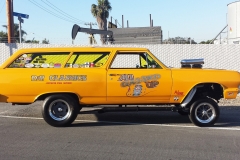