’65 Impala to be brought back to life 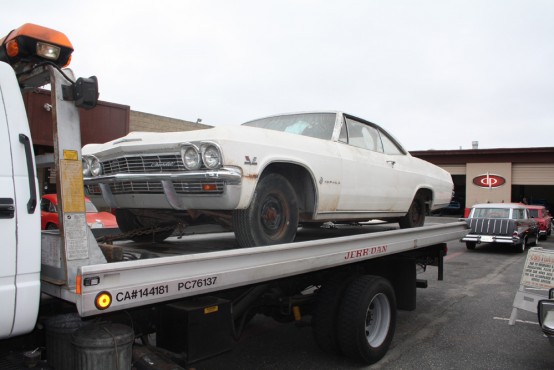 The car was among hundreds of barely driven Chevys that spent decades in a Nebraska field.

It has been almost a year since hundreds of decrepit, yet barely driven, Chevys went up for auction in a small Nebraska town, fetching more than half a million dollars for a retired auto dealer. The Field of Dreams, as it was called, received national media attention for its owner’s unusual business practice of storing unsold vehicles – for decades – among them a 1958 Cameo pickup with 1.3 miles on the odometer, a 1963 Corvair with 17.2 miles and the 1965 Impala with 10 miles on the clock that has now landed at the Huntington Beach hot rod shop, and Chevrolet specialist, D&P Classic Chevy.“These cars were in a field, so they’ve had a rough life. This Impala is neat because it’s like a time capsule, but it’s unfortunate these brand spankin’ new cars were out in the weather in Nebraska,” said D&P owner Darryl Nance, who received the Impala last week and has yet to wash 49 years of dirt from its exterior.

The Impala has “all the usual stuff from cars living in the field,” Nance said. Mice had nested in its engine compartment and some of the body parts on its white exterior are rusted. The big block 396 engine doesn’t run and will need to be ripped apart and restored before Nance attempts to turn it over. Its red bench seat interior has to be sanitized. The goal of the restoration will be to get it to operational condition but keep it as intact and original as possible, Nance said.

“If this car had been stored indoors, it would be a six-figure car in this condition, but the elements took its toll,” said Nance, who wasn’t told the purchase price from last September’s auction. The ’65 Impala’s owner, and Nance’s client, is a New York auto dealer.

“General Motors made thousands of ’65 Impalas. It was a popular car, but the 396 narrows it down. Most had a 283 or 327, so this will be a low production car with that big block. You can still buy a ’65 Impala reasonably now, but in five, ten years, that probably won’t be the case.”

The Impala’s Nebraska back story will only enhance its value.

Read more about this historic auction

Read more about the classic cars sold at the auction